The Loire in Flood

Anyone who lives in the Touraine will be aware of the variable level of the major rivers in the region; with a period of low water in summer and violent spates in spring and autumn. In the past these ‘spates’ have become serious floods.

In 1707 floods were said to have drowned 50,000 people, with the water rising more than

3 m in two hours in Orléans.  Later, at the time of Revolutionary change, during the freezing winter of 1788-79, the Loire suddenly melted – sending flood waters over fields and pastures and bursting through dikes into the city streets of Blois and Tours. (See Tours bridge is falling down,….)

For many hundreds of years there have been continual attempts by the peoples of the region to control the River Loire and, by the end of the Middle Ages (that’s the 1400s, folks) the long stretch of the river between Orléans and Anger was enclosed by dikes up to 13 ft. high. More recently several towns have built special works to defend themselves against the floods and the city of Tours, the most exposed of all, is surrounded by a circular dike.

In the upper stretches of the Loire a dam was built in 1711 at the village of Pinay above town of Roanne. This enabled the retention of between 350-450 million cubic feet of water and has reduced flood risk at Roanne. Three further dams exist, one near Firminy and two near St Etienne.

Major flooding occurred in the middle section of the Loire (the “Loire myenne”) between Nevers to Angers in 1846 (see image, above) and in 1856 and 1866 when Orléans and Tours was completely flooded, the “moyenne” area was under 1 or 2 meters water, and there were around 150 breaches of the defense systems. The upper stretches of the Loire also flooded in 1907 (see Le Petit Journal , left). 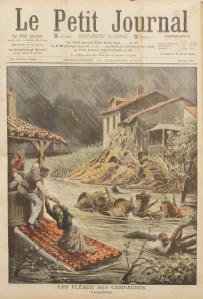 Further flooding occurred in 1910-1911. After the last great flood in 1980  a controversial plan was put forward to build a new dam. This dam’s purpose, so proponents claimed, was to control flooding, improve the supply of cooling water for nuclear power stations and to meet the increasing demand for water. The plan was eventually abandoned in favor of making more subtle adjustments to the water flow in the upper reaches of the Loire ~ these involve the ongoing work of Loire naturel (www.loirenature.org) as described in my previous blog.

The Loire basin (the area within the blue line on the map, below) is an important agricultural area and produces two thirds of the livestock and half of the cereal production of France. It is home to  300,000 people, 14,000 companies, 1,500 farms and 4,100 power plants.

There are a very great number of dikes and weirs as well as water monitoring stations throughout the basin. The majority of these dikes are well over 100 years old and many, if not most, of the flood defences are earth embankments.  The flood prone area in the middle Loire valley is divided into 33 different “val” or “polders”, each one separated from the river bed by an ancient dike system. Many vals have dikes only 10-30 km long while just three “vals” are protected by a 40 to 70 km length dike.  This system is now regarded by many experts and local authorities as providing totally inadequate protection against serious rises in the water level of the Loire. Indeed, as refered to in my previous blog, previous human attempts to tame the Loire are now thought to be contributing to the present day risk of flooding in populated areas and in vicinities housing the Loire’s four riverside nuclear power stations.

I am a blogger on 'The Social History of the Touraine region of France (37)' and also 'The Colonial History of Pennsylvania and the life & Family of William Penn'. I am a Director of Fresh Ground Group Ltd.
View all posts by Jim McNeill →
This entry was posted in Loire River and Loire Basin and tagged Blois, dikes, flooding, floods, Le Petit Journal, Loire, Loire nature, Loire Valley, Loire Valley History, nuclear power, polders, Touraine, Touraine History. Bookmark the permalink.

2 Responses to The Loire in Flood