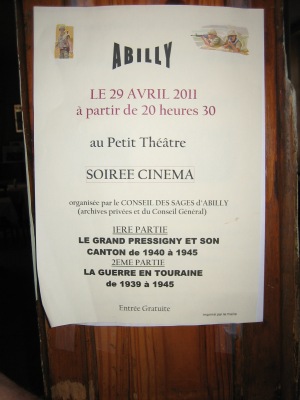 On the evening of Friday, 29th of April, I, along with Sandra, went to the Petit Théâtre in the small village of Abilly near Descartes in the South Touraine. There was a showing of two films regarding the Second World War in the Touraine: Le Grande Pressigny et son Canton de 1940 à 1945 and La Guerre en Touraine de 1939 à 1945. The evening was organised by Le Conscil des Sages d’Abilly and included private materials from the Conscil General.

It was such a moving event, in so many ways. There was the memorial on the outside of the church dedicated to the local resistance, Conte-Freslon (see slideshow below). The theatre was full to brimming with 90-100 local people, of different ages, who had gathered to remember, learn and commemorate those who struggled through such difficult times of occupation, separation, endurance, arrest, torture and loss. Then the were a couple of points during the evening when members of the audience, to the music of the films, quietly sang marshal and resistance songs from the period.

Both films contained material covering: the exodus of the civilian population from the north during 1940; the bombing, destruction and surrender of Tours; German occupation and the imposition of the demarcation line which left two-thirds of the Touraine under Nazi control; Nazi anti-jewish and anti-British propaganda; footage of the resistance in training and in action; the important role Communist Party members played in leading the resistance; the rough justice meted out to collaborators, and; celebrations of liberation in the local villages and towns as well as in Tours.

Surprisingly there was no reference to the role of the catholic church authorities during the occupation nor any mention of the massacre at Maillé. Amongst my the lasting impressions are the sights of vast numbers of children on the streets and the lack of images of young French men of military or working age who were either in prisoner-of-war camps or had been sent to Germany as forced labour.

The German bombing of Tours  On 15 June German planes bombed refugee columns in Parçay-Meslay to the north of Tours. On the 17 June, Marshal Pétain requested an armistice with the Germans. The French Army defending Tours, blew up an arch bridge beside Saint Symphorien. On the morning of 19 June the Germans are positioned at the entrance of Tours and shoot shells into the city. The French artillery resisted but the bombing of the city continued throughout the day and into the next day, 20 June. On the 20th, a truce was finally granted allowing for the passage of a French delegation to discuss the Armistice. There were many civilian victims as a result of the bombing and the bombardment and the damage to the city of Tours was considerable with twelve acres of buildings razed. See the photo in the slideshow below. 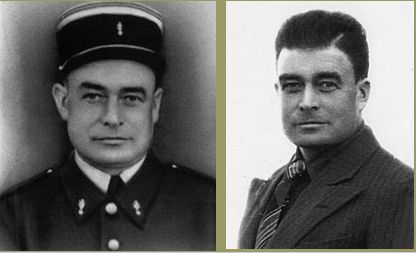 During the occupation many members of the resistance were rounded up and deported to camps – many never returned. Click here to read a list of those who were rounded up and sent to camps from Tours and Loches. One such person was François Bourles: Born October 30, 1906 at Hanvec (29). He was a police constable in the small town of Abilly. He was arrested under the order of the Gestapo on 27 July, 1944 along with a group of 64 people. François was imprisoned at Tours where he joined the group of prisoners being transported from Rennes. On 10 August he was sent by convoy to Belfort then transferred to Neuengamme. He arrived at Neuengamme on 1 September 1944. (Serial Number 43586). François Bourles died 10 April  1945.

Today, with the recent, limited, successes of the Front National in France, it is well worth remembering the futility of Nazi-ism and the extreme right-wing politics. Not only would the FN’s supremacist, racist philosophy bring hardship and death on a huge scale but its laughable, nationalist economic programme would also ensure widespread poverty and a stagnant economy just as it did in the 1940s.

I am a blogger on 'The Social History of the Touraine region of France (37)' and also 'The Colonial History of Pennsylvania and the life & Family of William Penn'. I am a Director of Fresh Ground Group Ltd.
View all posts by Jim McNeill →
This entry was posted in 20th Century, Abilly, Jewish persicution, Loches, Maillé, Resistance in the Touraine Region, Tours, World War II and tagged Conte-Freslon, Loire Valley, Loire ValleyHistory, Nazism, Parçay-Meslay, Touraine, Touraine History, World War II. Bookmark the permalink.

1 Response to Touraine Region during the World War II