Descartes ~ the decline of its paper industry & railway

I love the town of Descartes ~ it has a gritty realism that kind of suits me; it’s a really unpretentious, working town. Post World War II there were a number of paper producing centers in the Touraine at: Balesmes, La Guerche, Marnay, Azay-le-Rideau and La-Haye-Descartes (now Descartes). 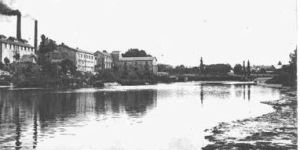 Descartes - old paper mill along the banks of the River Creuse

A second view of the old paper works

I understand from locals who live in the South Touraine that the paper industry at Descartes (and at the village of Buxeuil across the River Cruese) was the major employer in the town. From what I hear Descartes seems to have specialised in high-quality paper products. Since the industy’s demise the town has struggled economically. Its economic decline also had its effect upon the viability of the local railway ~ a decline compounded by the increased use of road haulage and private car use.

Railway traffic at Descartes seems to have ended in the 1990s. Though I noticed today, as I walked along the line from the church to the old station, that there has been some recent upkeep and maintenance of the track. Perhaps goods traffic still passes through the town?

Here are some present day images of industrial decline around the old railway station area:

For other images of Descartes and Le Grand Pressigny railway stations click here.

I am a blogger on 'The Social History of the Touraine region of France (37)' and also 'The Colonial History of Pennsylvania and the life & Family of William Penn'. I am a Director of Fresh Ground Group Ltd.
View all posts by Jim McNeill →
This entry was posted in Uncategorized and tagged Descartes, Loire Valley, Paper Industry, Touraine, Touraine History. Bookmark the permalink.

3 Responses to Descartes ~ the decline of its paper industry & railway