How the Jack of Hearts was trumped by Joan of Arc 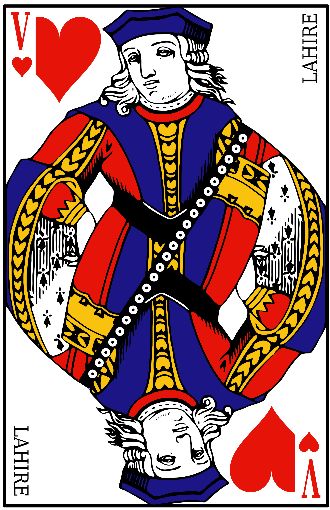 Over the past few weeks I’ve been doing background reading on Joan of Arc. In doing so I unearthed the following interesting story….

One of the leading military figures who fought with Joan during the Loire Campaign of 1429 was the knight, Étienne de Vignolles (b.1390, d.1443), also called La Hire (“The Ire” in Old French).

On many packs of French playing cards La Hire is represented as the Jack of Hearts (see left #).

La Hire was one of two knights who fought alongside Joan of Arc (the other being Ponton de Xaintrailles). Both these knights were ruthless, professional and ambitious soldiers who are known to have behaved at times with great cruelty and barbarity. They were typical of  opportunist knights  known as “écorcheurs” (“flayers of dead bodies”) who were armed bands who desolated France in the early 15th century stripping their victims of everything, often to their very clothes. This is far from the images usually portrayed of virtuous knights fighting alongside and being inspired by Joan of Arc.  It was La Hire who commanded the advance guard at one of the most deciding battles of the 100 Years War, the Battle of Patay, just to the North of Orleans.  Thus La Hire’s place in history was assured ~ yet surly, his military reputation is trumped by the legend of France’s Patron Saint, the young Joan Of Arc, herself.

All of which takes us back rather neatly to French playing cards.

Playing cards are thought to have been introduced into Europe in the late 14th/early 15th Century. It was from a very early date that French playing cards had the names of famous heroes from antiquity or epic heroes of the chivalric Middle Ages: 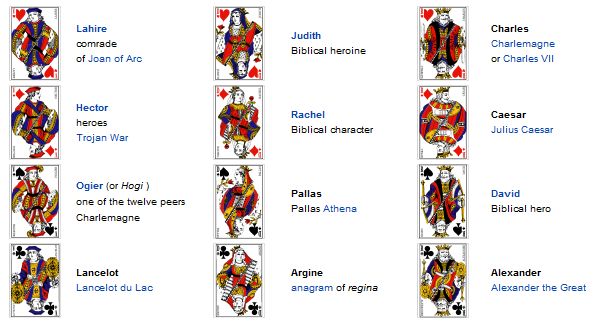 *’Hector’ may be after the mythological hero of the Iliad, but may have been named after La Hire’s brother. The Heros, or “Worthies”, as listed above, played a very important role in the psyche and moral framework of Europeans during the Middle Ages (but, more on this another day!).

The French claim that it was La Hire who designed the 4-suited packs of cards that we are all so familiar with today. He did this so they could be used in the game of Piquet which he had invented ~  a game of knights and chivalry with symbols representing warfare and centres of power:

Carreaux, Diamonds – are the arrowheads which are symbolic of the vassals from whom the archers were drawn

Trefles or Clover, Clubs – signifies the people who worked the land

Piques, Spades – represents the points of lances or pikes, and symbolises the knights

I am a blogger on 'The Social History of the Touraine region of France (37)' and also 'The Colonial History of Pennsylvania and the life & Family of William Penn'. I am a Director of Fresh Ground Group Ltd.
View all posts by Jim McNeill →
This entry was posted in Joan of Arc, Medieval history and tagged Étienne de Vignolles, écorcheurs, Battle of Patay, French playing cards, Jeanne d'Arc, Joan of Arc, La Hire, Lahire, Loire, Loire Valley, Loire Valley History, Piquet, playing cards, Ponton de Xaintrailles, Touraine, Touraine History. Bookmark the permalink.